Environmental Sampling Services: Why Every Health Trust Needs Them

Why does our Health Trust need Environmental Sampling Services?

Monitoring your healthcare environment through environmental sampling is as essential to infection prevention and control (IPC) as maintaining rigorous disinfection and cleaning procedures.

There are two ways in which environmental sampling can help your health trust – strategic decision-making and chain of transmission control.

Too many new IPC technologies are being offered to the healthcare sector without data to support claims as to their effectiveness, leading to confusion among NHS Trusts.

If you are thinking about implementing a new cleaning strategy or introducing new IPC technology, you need to know how effective it can be in your specific environment and be able to present a sound case for your investment.

Environmental sampling provides empirical evidence that allows you to make data-driven decisions on investing in new strategies and technology.

Environmental sampling to control the chain of transmission

Environmental sampling can be used to establish the vector of transmissions within a ward and thereby break the chain of transmission, ultimately helping reduce the number of hospital-acquired infections (HAI) under your care.

This not only reduces the number of infections and deaths among your patients, staff and visitors but also brings significant money-saving benefits to your Trust.

How are Environmental Sampling Services carried out?

When Test Labs conducts environmental sampling, their team visits the site to take samples from the air, surfaces and water supply both before and after the implementation of any new IPC strategy or technology.

On arrival at our laboratory, these samples are subjected to analysis and a full report is issued that highlights the differences in contamination levels before and after the implementation. The analysis and processing are carried out on the principles described in BS EN 17141:2020 – Cleanrooms and associated controlled environments. Biocontamination control.

How has Environmental Sampling helped other Trusts?

To illustrate the benefits of Test Labs’ Environmental Sampling Service, let’s look at two real-life case studies. For the purposes of confidentiality, the names of Trusts and any other parties involved in these case studies have been omitted.

An NHS Trust wanted to invest in new air purification technology but was unsure whether the technology’s performance would match the manufacturer’s claims to reduce their general level of microbial contamination.

On the day before the technology was installed, Test Labs visited the site and took surface swabs and air samples from specified locations throughout the ward agreed with the local nurses.

After seven days, the results showed the implemented technology had helped reduce contamination of air and surface. The results gave the Trust confidence to implement the technology for ongoing IPC.

The results taken after 45 days confirmed that the overall contamination level was continuing to fall as a result of the new technology.

Repeated local outbreaks of a specific bacteria had led to multiple infections and deaths among patients on a ward. The NHS Trust called in Test Labs to evaluate the situation and possible routes of transmission.

An initial scoping exercise was performed before taking samples, to understand local practices for cleaning, movement of staff and equipment from one area to another within the ward. This resulted in a full sampling plan, which identified most at risks location. One of this, was a group of  medical devices heavily used in the ward. The medical device could be dismantled, and the internal components were chosen as a possible at risk location.

We took numerous surface swabs, water samples from sinks and air samples from different locations according to the sampling plan throughout the entire ward and transported them back to our laboratory for analysis.

On analysing the results, the evidence pointed to a specific item of medical equipment as the potential source of infection and further tests confirmed the causative infectious organism was present within this location. Additionally, one of the water samples from a sink was found to be contaminated with Pseudomonas spp. despite a water filter was installed.

The filter was immediately changed, which potentially prevented further infections to spread. With a clear chain of transmission now confirmed, the Trust was able to implement a deep clean of the entire ward while concentrating their cleaning efforts on known sources of infection.

The Route to Environmental Sampling

To discuss environmental sampling services for your health trust, contact Test Labs on 020 3813 0969, at info@testlabsuk.com or via our online contact form.

Explore how we can support your Health Trust

We carry out on-site microbiological environmental sampling of air, surfaces and water to identify sources of contamination.

We test the efficacy of a wide range of disinfectants, including disinfection technologies and decontamination robots. 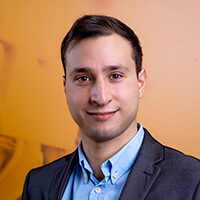 Enrico has over 6 years of experience in regulatory microbiology combining environmental safety with clinical settings as a study director. He graduated with a Bachelor of Science degree in immunology with medical microbiology followed by a master’s degree in clinical microbiology from Queen Mary University of London in 2013. He is a certified biosafety officer and operates as the lead microbiologist for Test Labs. Leading the microbiology team to perform EN disinfectant testing and R&D projects, he provides expert knowledge in infection control and prevention having vast experience working with environmental and pathogenic viruses, bacteria and fungi.

Work placement at Test Labs – Everything you need to know